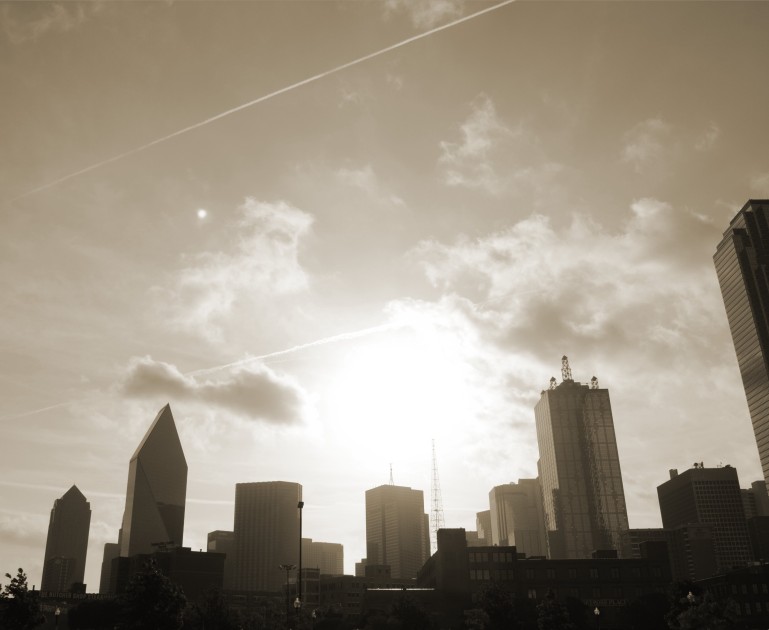 I work downtown Dallas. This is the view from our parking lot- shot on a cool spring morning when I couldn’t resist tracing the jet-lines.

It’s a little surreal sometimes, when I find myself negotiating corporate culture in the heart of a city that sometimes appears more plastic than real.

What is quintessentially Dallas? I ask several people…the answers vary: anything from the Texas State Fair (fried fried food) to the Cowboys (whom I know nothing about). I have always seen Dallas for its Bling! The manicured women hanging around Highland Park Village, a thirst for designer goods, money spent of dinner that could feed a small village….or the shiny cars parked outside ritzy restaraunts…I felt like such a rebel showing up and valet-ing Miles, my ’98 Civic, paint job disappearing, beautiful rust corroding his solid surface…

In all fairness, the city and my perception of it have both evolved tremendously in the last two years I have inhabited it. My time here has reinforced what I have always known- It’s never about the place, it is about the people.

Sub-consciously wrestling stereotypes in the Big-D has taught me much about myself, and my fellow human beings. I was suffocating for just a while there before I found more people who shared the values I cherish.

But even the frigthening negation of what was my solid ground, from all the others was good for me. Having to constantly justify your point of view strengthens and solidifies your beliefs. Moreover, being forced to dissociate the core of a person from their political and religious agendas, has been a challenge and a revealation to me. It forces you to seek the soul of a person- and then the rest becomes irrelevant at some level…

I, like most of the world, take Evolution as fact- it is not a debate. I am an atheist but I realize while Jesus may have saved this bunch of people- Krishna, Allah and Buddha are just as valid to their followers. And I can’t say I understand why Palin was such a goddess to some of my friends. But in the end- even the friends who disagree with me on all this and more- remain friends…people I cherish. They have a part of my soul, and I have some of theirs.

And I have Dallas to thank for them all- who have opened their hearts so I could waltz right into them.

I recently moved to Oak Cliff in a pretentious attempt to avoid the pretentious I guess, and while I love being in less manicured territory where life feels more “real” just a little bit removed from the city lights, I do look upon them fondly. So what I can tell you about this city, is that it is still searching for its soul…it’s a great place to discover yourself- it affords one the luxury of time in many ways. It’s fantastic for you guys just graduating people- it lets you slowly get your feet wet in whatever it is you want to do. It definitely has its moments…as do I living in it. Just check out my other blog and you’ll see!